Banking on an Active Mind Interview with Bahrain This Month Magazine – August 2010 – By Paul Balles

The highly-charged technical language of banking and finance take a professional like David Gibson-Moore to make his industry’s goals clear and achievable. 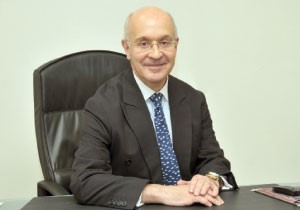 Inspired by his bosses over the years, David Gibson-Moore now inspires others. A financial leader in both Europe and the Middle East, David advises institutions from his base in Bahrain.

With management experience and expertise in investment banking, institutional fund management, share trading, private banking, corporate finance and brokerage, he has run the gamut from bank executive to CEO and consultant.

David is also a tennis player, and that sport, like others, has its own jargon that one needs to understand in order to follow the sport. It’s more than “game, set and match” and “love” means something different from its ordinary use.

David’s profession also employs a special language that not many outside of the financial industry understand. Like other professions, the financial service industry has a jargon of its own, which explains the difficulty for many to understand the problems causing the recent financial crisis.

At one point, David refers to a “stratospheric level of private banking” where the term “private banking” goes beyond the vocabulary of those outside the banking industry.

“Hedge funds” and “derivatives” are financial jargon for another type of investment. Briefly, a hedge fund invests in a wide range of investments and is open to a limited number of wealthy investors.

Derivatives, in the simplest terms, are contracts where the seller receives money in exchange for an agreement to buy or sell some goods or services at some future date.

This resembles a wager on future prices of stocks, bonds, properties or currencies.

Excitement of learning and leading After graduating from Oxford, David trained as a public accountant in London. Then he went to Paris on his first overseas posting, where he set up most of Price-Waterhouse Cooper’s office.

Upon returning to London, he went into investment banking. After a short period with First Chicago, David joined Chase-Manhattan Bank. He recalls, “My first posting was here in Bahrain, where I set up a large portion of Chase Manhattan’s business.”

After setting up private banking and then institutional investment in Bahrain, David was asked to go to Switzerland to run Chase Manhattan Suisse in Geneva. During 12 years with Chase Manhattan Suisse, he held executive positions ranging from Senior Vice President in Europe, Middle East and Africa to chairman of the Board in Switzerland, Jersey and Luxembourg.

It was particularly exciting for David, during that period in his career, to meet and work with interesting and prestigious figures in government, including heads of state, ministers and business leaders.

He recollects times when he travelled with David Rockefeller, chairman of Chase Manhattan Bank. “I journeyed quite a lot with him through Eastern Europe and the Middle East. We were literally treated like a head of state. It was an extraordinary experience to travel with Rockefeller,” he says.

“David Rockefeller recommended I relocate to New York, where I helped with our International Advisory Committee, made up of very prominent personalities. It was exciting partly because of David Rockefeller’s personality and the potential for working closely with him.”

A key shareholder in the Kuwait investment bank was the Al Rajhi family of Saudi Arabia. “They had some work they wanted done in Riyadh,” he reflects, “so they arranged to transfer me to the Al Rajhi Bank, the largest Saudi Islamic bank.”

When he arrived in Riyadh, his responsibilities included three divisions of the bank: institutional fund management and private banking, investment banking and corporate finance and brokerage and share trading. Fortunately, he notes, David had a good team working with him.

Since all but three of the staff were Saudis, the office language was Arabic; so David had to give himself a crash course in Arabic. He managed to learn enough to deal with day-to-day matters.

Putting share prices on a screen for local investors while they drank coffee was “pretty pioneering stuff in those days. The prices would be watched, and when they saw the price going up, they’d say ‘Buy, buy, buy’ and they’d all buy,” he recalls.

In 1999, David returned to Bahrain to manage Robeco.

He reminisces, “It was wonderful to come back to the country we’d loved so much.” He assumed management responsibility for the GCC and MENA of all major asset categories. “Robeco,” he notes, “is owned by the cooperative Rabobank, the only AAA commercial bank in the world. Conservatism was paramount. To have done anything to damage that triple A status was absolutely intolerable.”

About his experience with Robeco, David considers “building a premier blue-chip name for an organisation from scratch in the Gulf was extraordinarily rewarding.” Robeco has been around since the mid-20s and invented the first mutual fund. However, notes David, “When I started with Robeco, it was hardly known here at all, so the first task was to explain who you were.”

He notes that he’s doing a lot of training, building on what he’s done over the last decade. This includes “training for institutions and helping companies that want to set up in Bahrain with business plans.”

David says, “This is particularly useful for companies that don’t know much about the area here. I’m building on a huge number of contacts built up over the years.”

Recalling the challenge of adapting to a different culture in the Gulf, David says, “I remember the first time I came down here with Chase; it took me about a year before I began to get to grips with the relationships between the families and how the government works.”

One thing that David would like to see changed in the financial industry is a return of relationship banking. He comments that much of the recent financial crisis resulted from huge packages of mortgage investments that have vanished. It would help to know your borrower.

Having benefited from his years in the financial industry, he says “for the remaining part of my career, I’d like to be able to put something back in the way of helping new bankers coming into the industry.”

David earned his BA and MA degrees at Oxford University, where he read chemistry for his BA and researched quantum mechanics for his MA. He later earned an MSc in international economics at the University of London.

Socially adept, he set up the Oxford-Cambridge Club in Bahrain, which has formal dinner meetings and invites speakers of interest to graduates of the two leading British universities. David serves as the club’s president. In addition, David is a longstanding committee member of Bahrain’s international gastronomic society, Chaîne des Rôtisseurs. An active member of the Rotary Club, he served as a member of the board.

The universities he attended, the activities he’s involved with, and his profession have all stimulated a remarkably active mind. To stay in good physical shape, David exercises regularly and plays tennis. He’s an expert in the jargon for that as well!