David Gibson-Moore chaired the two days of the 7th edition of CC Forum “Investment in Sustainable Development” in the Kingdom of Bahrain on March 22-23, 2022. A truly distinguished group of speakers, panelists and a most prestigious audience were present at the event.

Max Studennikoff, the Chairman and Founder of CC Forum, organised the first conference in London in 2017. Over the course of five years, thanks to his great vision and energy, it has grown to one of the most significant investment forums worldwide. The focus is on the environment and sustainability. Some of world’s best speakers including Ban Ki Moon, Dame Jane Goodall, Prince Albert of Monaco, Dr Nouriel Roubini, HSH Prince Michael of Liechtenstein and many others have participated. It has been called by some journalists “The Green Davos”. 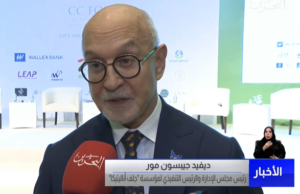 CC Forum’s previous editions have been held in the UK, Monaco, Malta and Dubai under the patronage and in the presence, among others, of His Serene Highness Prince Albert of Monaco and the Prime Minister of Malta. The London 2019 edition of CC Forum received a written royal greeting by Her Majesty Queen Elizabeth II.

Amongst many other fascinating and most important topics, we covered the green energy transition across the GCC, the incorporation of the UN’s ESG goals into corporate strategies, how digital currencies help to encourage social inclusion and philanthropy as a means of impact investment.

The Organising Committee and Advisory Board expressed their deep gratitude to His Royal Highness Prince Salman bin Hamad Al Khalifa, the Crown Prince and Prime Minister of the Kingdom of Bahrain and the Bahraini Economic Development Board for their unwavering support and encouragement for the Bahrain event.

The event was covered by Bahrain TV. We are all looking forward immensely to the next CC Forum edition in London later in the year.